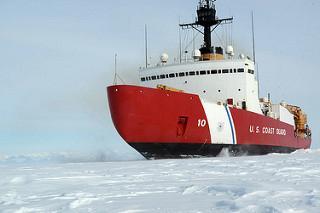 The U.S. Coast Guard has announced that it is ready to release the long awaited Request For Proposal (RFP) as early as March 2, 2018 fo an heavy icebreaker replacement.  According to Admiral Paul Zukunft the RFP will go out to five potential bidders.  It will include a comprehensive set of requirements and specifications for a new Arctic icebreaking fleet.  President Trump has been urged by members of Congress to support this requirement in his plans to rebuild the military.  The Coast Guard has not built a new icebreaker since the late 1970's and is being forced to cannibalize older vessels in order to maintain a state of readiness.  The Coast Guard is planning on the acquisition of up to six new ships.

A draft of the RFP was released on October 19, 2017 under the auspices of the US Navy.  The draft called for construction of one Heavy Polar Icebreaker (HPIB) program ship with options for two additional cutters.  The draft indicated that the RFP contains sensitive information related to critical technology that must be protected from release to unauthorized, non-U.S. entities and parties not having a valid need to know.  The Washington Navy Yard, Washington, D.C. is listed as the place of performance for the contract.